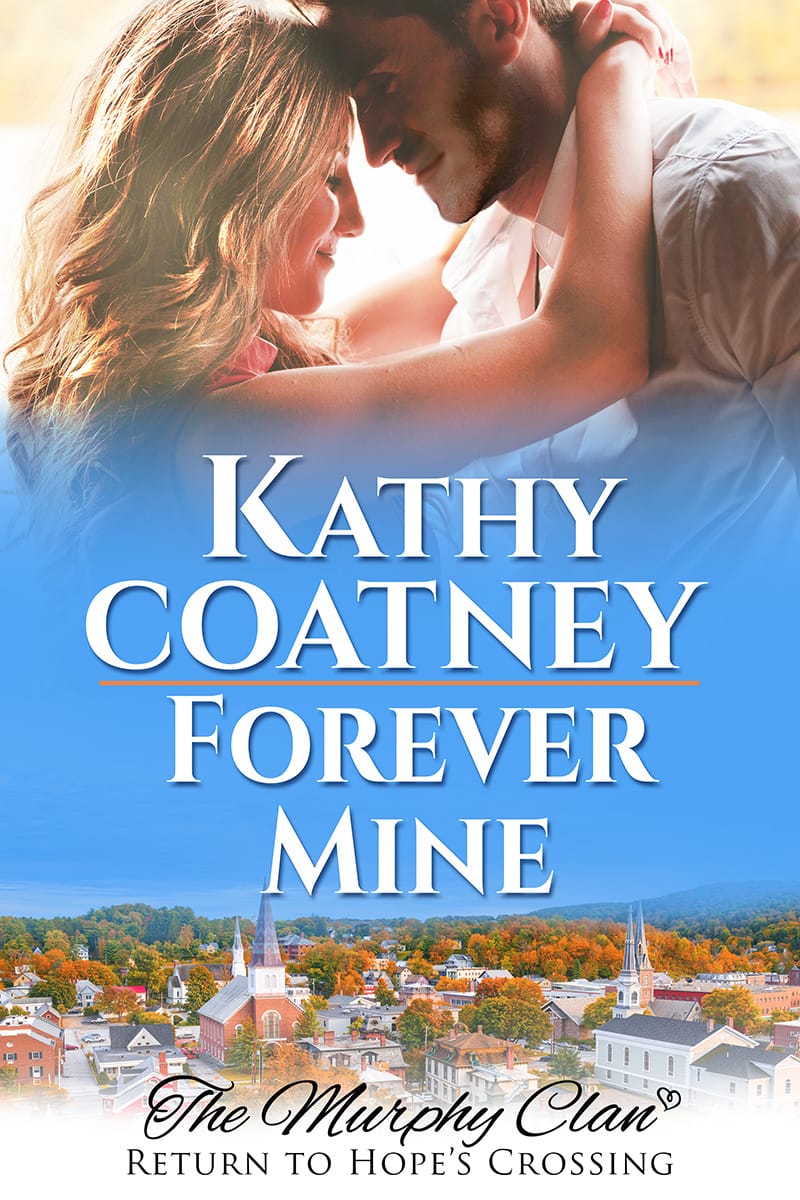 He’s lost everything that gave his life meaning. She’s determined to show him that she’s his new beginning.

Cassie Cooper’s neat, orderly life is turned topsy-turvy when overnight she becomes a single mom to three rambunctious boys. Between running her beauty salon and caring for her new charges, she has no time for a relationship. But love is definitely in the air when her childhood friend, Griffin Valentine, moves back to town.

Griffin Valentine, famed orthopedic surgeon, walks away from a lucrative practice after his two-year-old son dies in a car accident and his wife divorces him. Returning to Hope’s Crossing to take over a small medical practice, he throws himself into caring for his patients. As much as he’s drawn to Cassie and her readymade family, the past looms over him, threatening to destroy the new life he’s building.

Can Cassie help Griffin find the courage to love again? Get your copy today because a second change at love doesn’t come along every day!

The McDonald sisters sat under hair dryers and gossiped, their shouting so loud it muted the bowling balls hitting the pins in the bowling alley on the other side of the glass wall.

Cassie Cooper, owner of Sittin’ Pretty, the beauty salon inside her Great-Aunt Luella’s Beauty Bowl—bowling alley, restaurant, and community center—stared into the open desk drawer at a pair of foam earplugs. She closed the drawer and the temptation to use them.

Eleanor’s shout drew her attention back to her clients. “Matilda, did you hear that Charlie Perkins is expecting another litter of puppies?”

“No, I said Charlie Perkins.”

“Charlie’s pregnant. How is that possible?”

Cassie pressed her lips together to suppress a laugh, blotting the perspiration dotting her forehead. She crossed over and inched down the thermostat and felt a rush of cool air.

The timer dinged. She took Matilda out from under the dryer and commenced to comb out her short, wiry, gunstock-gray hair.

Without Eleanor to shout at, Matilda turned her attention to Cassie. “Did you hear that Griffin Valentine bought the place down the road from you?”

Cassie made an appropriate noise to indicate she was listening, but didn’t comment beyond that. Matilda’s raised brows told her she was fishing for information, and Cassie wasn’t about to oblige her. If the local gossipmonger wanted to know more, she’d have to look elsewhere.

Griffin, Sam, and Emma had protected her from speculation every time her mother left her with Aunt Luella and Uncle Albert. Now it was her turn to shield Griffin from the small town busybodies.

A joyous shout drew Cassie’s attention to the bowling alley as her youngest charge, nine-year-old Jeff, high-fived Kevin Parker, her cousin Emma’s son. Jeff’s brothers, were on the next lane with two of their friends, and for once, the two weren’t tormenting their younger brother.

It had been over a year since her cousin, Raymond, had dropped by to visit Aunt Luella, went out for a drink, and never returned, leaving the children behind. Since both of Raymond’s parents were dead, Cassie had taken the kids in the same as Aunt Luella and Uncle Albert had done for her.

B.C. (before children), Cassie had had a long list of rules. Rule number one—never leave the house until hair is styled and makeup applied. Rule number two—no ponytails or baseball caps to cover a bad hair day. Rule number three—everything in its place and a place for everything. Those and more rules vanished with the demands of parenting a nine, ten, and twelve-year-old.

“It would certainly be handy to have Griffin within calling distance with all the mischief those boys get into,” Matilda said.

Cassie bristled. Her boys were a handful no question, but she didn’t appreciate the insinuation they were undisciplined. “My boys aren’t troublemakers.”

“Your boys? I thought they were Raymond’s. Did you hear that, Eleanor? Cassie’s taken custody of Raymond’s boys.”

Matilda scowled at her sister. “She can’t hear a blessed thing anymore.”

Cassie swore under her breath. After a year, she’d come to think of them as hers, but she didn’t want that bit of information all over town. They were, after all, Raymond’s children.

Picking up the curling iron, she did some finishing touches on Matilda’s hair.

Matilda changed the subject. “Now that your cousin, Bella, is remarried and having a baby, that leaves you the only single one of the group.”

Cassie sucked in a painful breath. She’d always dreamed about a big wedding, a husband she loved, and children, but so far Mister Right had been Mister Wrong. She wanted what her aunt and uncle had had, what her cousins have, but at the same time, she refused to settle for anything less than a man who would cherish and love her.

The timer dinged and Cassie blew out a sigh of relief as she shut off Eleanor’s dryer. At least their shouting would drop a decibel.

The two continued to yell back and forth, which inspired Cassie to finish their comb-outs in record time.

Fifteen minutes later, she ushered the sisters out the door, then got the boys settled in the kitchen with their lunch. Realizing she’d forgotten her lunch at the salon, she went back to grab it, and the phone rang. She penciled in a color for Beatrice Wright—the sweetest lady in five counties. But Cassie had yet to convince her that jet black wasn’t the best choice for her coloring. She didn’t have the heart to tell Beatrice it made her look like an eighty-year-old Elvira.

She’d barely hung up the phone when it rang again, this time with more appointments for homecoming—cuts, styles, and highlights. She could set the clock on an increase in business around the Hope’s Crossing High School social calendar.

By the time she made it back to the kitchen, the boys had finished eating and her cousin, Emma, had arrived with her six-month-old daughter, Annie, in a front pack.

“Come on, boys. I want to get to the field before Annie falls asleep.” Emma bounced the baby up and down to keep her from fussing.

Cassie had never seen the boys grab their gear as quickly for her as they did for Emma. “Thanks for picking them up. They’ve done nothing but talk about going to play ball with Kevin at the ballpark.”

“I should be the one thanking you. Kevin will have playmates while Sam and I go over the books and get ready for the playoffs.”

The cowbell clanked as the boys shoved open the door and raced outside before Cassie could tell them goodbye, so instead she blew a raspberry on Annie’s cheek that set off a peal of giggles. A pudgy hand swatted at her cheek. Cassie kissed it, and Annie clutched a fistful of her hair with the other hand.

“You little stinker.” Cassie extricated the baby’s fingers and took a step back to see her grinning devilishly.

“Approach at your own risk,” Emma said between chuckles.

“What would be the fun in forewarning you?”

Cassie laughed. “I’ll pick them up after I close the shop.”

“If we finish before you’re done, we’ll be at the house.”

Cassie gave her cousin a hug and Annie another kiss, then watched them head out the door before going back to the salon for her one o’clock appointment.

She didn’t get another break until four when she had a cancellation. She made herself a cup of coffee and sat down in the tiny office hidden away from the bowling alley. Propping her feet on the counter, she took out her phone scrolling through videos of braiding hair, then searching for wedding hairstyles, looking for that perfect look her clients were always wanting.

She skimmed through social media until Joshua’s picture came on the screen, his arm around a curvy brunette. She couldn’t stop herself from clicking on the album. All their wedding photos came up, including several videos. She tapped on one and watched a beautiful fairytale wedding. The first dance started and the band played Love Me Forever—the exact song she would have chosen.

Ten months after their breakup he’d married someone else. Resentment burned deep. They’d been together two years, and he’d never once hinted at marriage. Damn it, this should have been her friends and family celebrating her nuptials!

How could Joshua have left her when she’d needed him most?