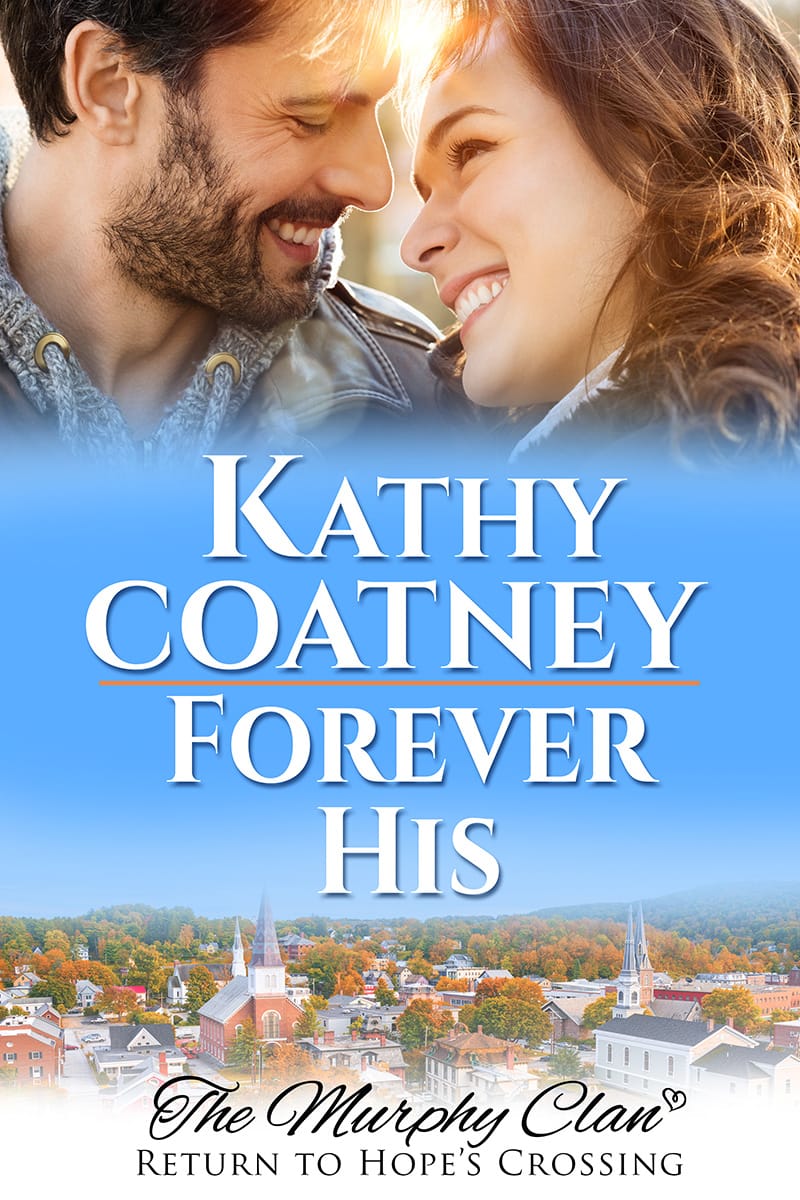 Love romance? Love baseball? Forever His is the perfect blend of both.

Emma Delaney has always loved Sam Parker. Sam reminds her of warm sunshine, laughter and passion. In his arms, she dreams of white picket fences and happily-ever-afters, until the day he leaves her for baseball.

A knee-ending injury puts Sam permanently on the bench. With his baseball career cut short, he returns home to face his guilt, and the woman he abandoned for the game. The woman he can never have—Emma.

Get your copy today because when friends become lovers sparks fly!

Previously published as She’s Out of His League

Sam Parker navigated his dark blue SUV through the slice of road narrowly cut between the endless acres of mid-July-high corn.

“Are we there yet?” His eight-year-old son, Kevin, repeated the age-old question for the third time in the space of thirty minutes.

“That’s what you said last time.”

Sam understood his impatience, but he felt the opposite. Instead of being relieved they’d reached their destination, tension pulsed between Sam’s shoulder blades. Would coming home be enough to end the rift between him and his father?

Unlikely. Joe Parker had never understood why Sam had chosen a professional baseball career over farming. And he was certain that in the nine years he’d been away, the old man hadn’t mellowed. When his father took a stand, he held it to the bitter end.

The familiar pristine-white church steeple rose above the towering stalks, acting as a beacon over the emerald sea of cornstalks.

Sam eased off the gas when he approached the corner of Glory Lane and Main Street, and he caught a glimpse of the white picket fence that circled the cemetery. Memories thick as cobwebs crowded him. He hesitated a moment, his heart thudding in his chest, then continued into town.

The corn suddenly parted and gave way to a line of square brick buildings. Silver maple trees in full summer uniform tossed shade over his SUV as he cruised down Main Street. Would he receive a hero’s welcome from the town? Doubtful.

Kevin’s blond head bobbed as he bounced on the passenger seat. “Will I see my grandpa soon?”

The bitter taste of regret lodged in Sam’s belly like one too many donuts for breakfast. He forced a smile. “Yes.”

“A couple of miles.”

This was the most animated Sam had seen the boy since he’d come to live with him six months before. Rarely did he get more than a yes or no response, and it was generally followed with silence.

Surprisingly, Kevin had been downright exuberant when Sam told him they were going to Hope’s Crossing to see a grandfather he hadn’t known existed until two days ago.

Sam hadn’t had the heart to tell him the real reason for the trip—that his grandfather had leukemia, needed a bone marrow transplant, and that without it, he would most certainly die.

Kevin had enough on his shoulders after his mother’s abandonment six months ago, and then her death days later. Sam wanted to spare him another loss, but he would have to tell Kevin the truth, and soon.

The marquee of Mumford’s Theater towered above the downtown buildings. The Friday night hotspot for throwing Jujubes and watching G-rated movies with his brother, Ryan, his best friend, Griffin, and Emma.

He pulled in next to Emma’s truck and memories of sultry summer nights, bare skin glowing in the moonlight, and soft laughter dancing on the summer breeze filled him.

“Why are we stopping?”

He shook off the past. “I thought we’d grab some lunch before we went to the farm.”

“I’m not hungry. I want to see the farm.” Kevin folded his arms over his chest and turned to stare out the window, the animated child replaced with the sullen little boy.

Sam swore under his breath. Every time he made headway with Kevin, he did something to screw it up. Of course, he could hardly blame the kid for his reaction. They both knew Sam was stalling, and facing Emma was preferable to confronting his father. But explaining the rocky relationship he had with his father was beyond his abilities and a eight-year-old’s comprehension.

Sam ruffled Kevin’s hair and he jerked back.

Stung by his son’s rejection, Sam retracted his hand. “We will, but first I want to introduce you to some old friends of mine.”

Sam pushed open his door and stepped out into the sticky midsummer air. His knee gave slightly when he put his full weight on it. The collision at home plate a year ago during the playoffs had not only ended his professional baseball career, but left him with several surgeries and months of physical therapy. The doctor had assured him that his knee would heal eventually. It would never be strong enough to play baseball again, but he should have general use of it. Still, it had been a year, and he was coming to the conclusion this was as good as it got.

He took another step, and when the knee held, he walked to the passenger side and opened the door. Kevin obediently got out and followed Sam into the Beauty Bowl without a word of complaint. His compliancy troubled Sam. Keeping his emotions bottled up inside wasn’t healthy, but every time he’d tried to get Kevin to open up he’d been met with a wall of silence.

The gray-haired McDonald sisters still sat at the front table facing the street. All the years Sam had lived in Hope’s Crossing, they’d sat in that very spot watching the residents of Hope’s Crossing stroll past while they sipped coffee and gossiped about the local citizenry.

Sam flashed them a smile and nodded. In response, they gaped at him. He quickly guided Kevin across the black and white checkerboard floor, ignoring their whispers. Instead, he focused on the woman with the strawberry-blonde ponytail seated at the revolving chrome and vinyl fountain stool.

His gaze swept over Emma, down the slope of the soft, smooth skin visible at her neck, to the trim waist, to the narrow booted feet hooked over the chrome rung of the stool.

Stopping behind her he leaned forward and caught a whiff of that unique blend of purple prairie clover and sunshine that he always associated with her. He watched her dip a spoon into her signature treat.

He leaned closer to whisper into her ear. “Still got a thing for fudge sundaes, I see.”

A sharp intake of breath followed his comment, then she squared her shoulders and slowly swiveled on her stool. His breath stalled when she faced him fully. She was still a cool drink of water on a blistering summer day.

He studied the average nose and evenly spaced eyes. Most wouldn’t discern a single standout feature, but Sam knew better. When she smiled the ordinary became the extraordinary, setting fire to her eyes and turning the dull green to bewitching velvet.

That smile had been his light once, and her gentle laughter the sustenance for his heart and soul—until his brother, Ryan, found them together. After that everything that had been good in his life went to hell, except for baseball. He’d clung to his career like the lifesaver it was. And now that was gone, too.

It took a moment for her words to penetrate into his brain, and when they did, he bristled. “Did you honestly think I’d have ignored your call?”

Her chin inched up a notch, the green of her eyes deepening. “I honestly didn’t know. It’s not like you and Joe have been on the best of terms since you left here.”

“That was two days ago.”

“I got my affairs in order and came. Has something changed? Is he worse?”

A flicker of fear crossed her eyes, then resignation. “No, nothing has changed.”

His anger melted away as rapidly as the ice cream in her dish. He had no right to be upset with Emma. Any blame fell squarely on his shoulders. He was the one who’d allowed nearly a decade to pass and made no effort to breach the abyss between him and his father.

Pride. It had kept him from driving home and ending their feud. And now his father was seriously ill, possibly dying, and did he call his only surviving son to tell him? No, he’d left that duty to Emma.

The only reason he was here now was Emma. If it had been up to his father, he might not have found out until it was too late.

Formerly titled She’s Out of His League 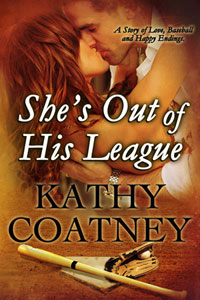