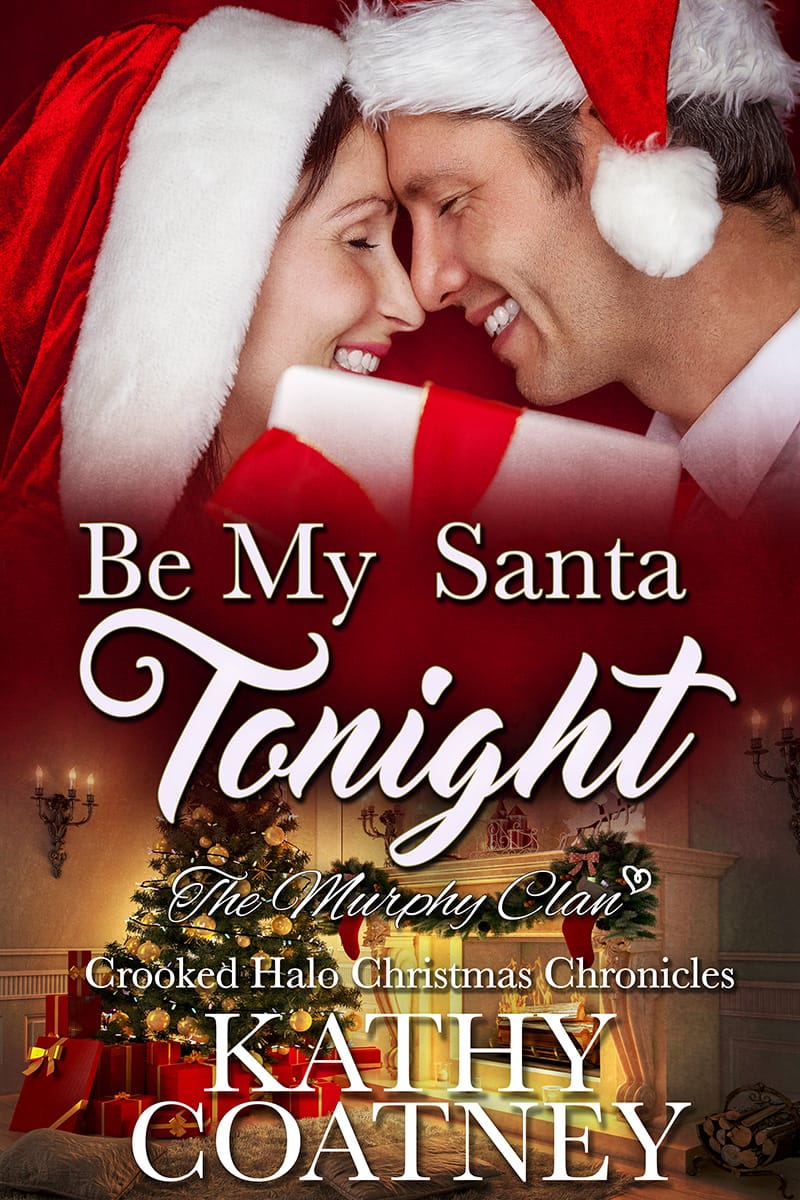 A Christmas miracle in the making

She loves Christmas. He’s a grinch.

In Holly Krueger’s tightknit community of Conspiracy, California, everyone goes the extra mile to help each other, especially during the holidays. Between running her flower shop and organizing the Lighted Ship Parade for the Conspiracy Christmas festival, Holly doesn’t have time to think about what’s missing in her life.

Since Liam Callahan’s last relationship crashed and burned, he’s put dating on hold and focused on his career. But when Holly convinces him to be Santa for the annual Christmas parade, he wants to make all her Christmas wishes come true.

The only thing Holly wants for Christmas is Liam under her tree, but she isn’t sure he’s ready to give his heart. With a little help from their guardian angels, can Liam make Holly’s Christmas wish come true?

Tag along with this heavenly duo & get Be My Santa Tonight, Chronicle One of three Crooked Halo Chronicles Christmas stories!

A charming novella to get you in the Christmas spirit!
This charming novella is the perfect read to lead you into the holiday season. Two angels are tasked with bringing together an unlikely couple. Heart-warming, sweet, and emotional, I was rooting for the angels and Holly and Liam. But what makes this story even more special is the fabulous cast of characters in the little town of Conspiracy, especially the TCB (Trench Coat Brigade), who make it their business to solve the local mysteries (even if sometimes they’re making mysteries out of nothing!). So grab onto a Christmas star and start off the holidays with a feel-good, heartwarming Christmas story!

Aurora, head angel for the Lost Souls Division, tossed her heavy black ponytail over her shoulder and tugged her tie-dyed T-shirt into place before catching a star and heading home.

Drifting around the Space Needle, Aurora released her hold on the star and floated until her scuffed combat boots touched the pavement a couple of streets over from Pike Place Fish Market. She crossed the street to Heaven Sent, a private detective agency wedged between Man’s Best Friend, a doggie bakery, and Sweet Nothings, an exclusive lingerie shop.

The nuns were the only humans who could see and speak to her, but they didn’t know she was an angel.

“Sister,” Aurora said as she crossed the smooth marble tiles sprinkling stardust in her wake.

Aurora studied Sister Marie’s flawless Asian skin and estimated her age anywhere from forty-five to sixty-five. Behind that angelic voice was a kick-ass nun when the situation called for one. “Honestly, Sister, I’m running a little low on faith today.”

Sister Marie clucked her tongue and put down the pitcher she was using to water the potted Christmas trees lining the far wall, each decked out with lights, sparkly ornaments, strings of popcorn and cranberries. The branches drooped, pine needles carpeting the floor. The sister might be accomplished in many areas, but horticulture wasn’t one of them. “Anything I can help with?”

Aurora braced a hip against the gleaming cherry desk, the faint scent of lemon oil curling into her nostrils. Pulling off her rose-colored glasses, she polished the lenses.

“I’ve decided to do something a little unconventional to save a pair of lost souls.”

The sister continued to smile at her. “Unconventional means can be very useful.”

Her response surprised a laugh from Aurora. Sliding her glasses back into place, she said, “I suppose you’d be an expert at that, wouldn’t you?”

Sister Marie’s eyes shone with a mischievous sparkle. “It has become the rule versus the exception in this business.”

“My superiors won’t be pleased with my actions.”

“What is more important, Aurora, saving these lost souls or pleasing your employers?”

Warmth spread through Aurora as she pushed away from the desk.  “Sister, you always know the right thing to say. Thanks.”

Sister Marie waved as she picked up her pitcher and resumed the task of watering trees that were already on the express route to the afterlife.

Aurora stepped through the side door and took the stairs to the landing. A glass elevator waited. For humans, the elevator only went to the fifteenth floor, but for angels it went to the heavens.

She stepped inside and the doors glided shut. A moment later, the Seattle skyline glowed against the setting sun.

Returning to the Emerald City always filled Aurora with hope, and this time was no exception. She especially loved the city dressed for the holidays, from the Christmas tree on top of the Space Needle to the Ferris Wheel on the wharf lit in iridescent green and red.

Hope spread through her as she was reminded that nothing was ever lost—misplaced perhaps, but never lost. And that meant there was still a chance to bring Holly and Liam together.

The elevator stopped and the door opened. Aurora stepped into the lobby crowded with newly ordained angels waiting to be assigned to a division.

Her tie-dyed T-shirt, flowing skirt, and boots stood out against the rich paneled walls and elegant chairs, but Aurora didn’t care. She was who she was, and she made no bones about it.

Whispered comments always followed in her wake, but the one that pleased her the most was when she’d heard herself described as a cross between Janice Joplin and Mother Theresa. She definitely identified with the Janice Joplin comparison, as she’d spent her youth living on San Francisco’s Haight Street in the sixties. Peace and free love had molded her into the person she’d been and the angel she’d become.

As she left the lobby and started down the long hallway past the divisions for Postal Angels, Weather Angels, Lost Pet Angels, and Guardian Angels, she pondered the Mother Theresa comparison. That she didn’t understand. She was more of a free-spirit angel, like John Travolta’s Michael, than Mother Theresa.

Turning the heavy brass knob, she entered the Lost Souls Division, or as she liked to think of it, Angels R Us. Her apartment/office was a near replica of the old Victorian she’d rented in San Francisco, right down to the rose-colored walls and pop art.

Inhaling deeply, Aurora dropped into the lotus position. Closing her eyes, she allowed her mind to empty as she waited for her apprentice angels to arrive. Her plan to save Holly and Liam was unorthodox certainly, but as Sister Marie always said, drastic times called for drastic measures.